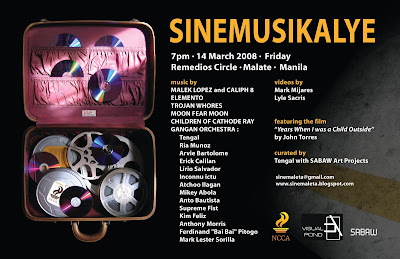 For the Sinemusikalye program, three projectors and three screens were combined to make an expansive panoramic view; while the country’s best sound arti 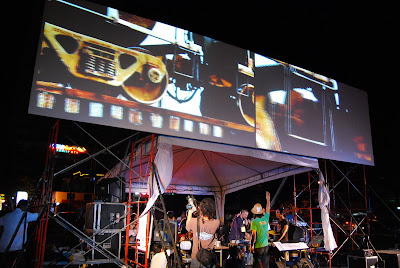 sts, electronic musicians, and instrumentalists will perform live music at Remedios Circle, Malate in this never before attempted performance of this scale.
The multi-channel projection of video images and panoramic images by Lyle Sacris and Mark Mijares, were controlled and manipulated live by video artists, Tad Ermitano and Blums Borres (courtesy of New Media Arts Manila). The main performances included electronica pioneers Malek Lopez and Caliph 8 scoring Mowelfund animation films in three movements; while Tengal and The Gangan Orchestra (composed of 16 of the best local improvising sound artists, electronic djs and musicians) will be performing Tad Ermitano’s video graphic score with algorithms by Tengal as part of the GANGAN SERIES; and the evening culminated with a full-orchestral sonic blast combined with the panoramic videos manipulated live by Tad Ermitano. Also performing were seminal new media artists, Elemento and The Children of Cathode Ray who scored animation films by underground legend, Rox Lee, as well as a film by Tad Ermitano. The new generation of electronic musicians, Moon Fear Moon and Trojan Whores performed their unique brand of sound deconstruction alongside video deconstruction by Blums Borres.

Starting off the Sinemusikalye festivities at 7 pm, filmmaker John Torres screened the three-screen version of his feature film, Years When I was a Child Outside. Previously premiered at the Berlin Forum, in Berlinale international film festival, this was its Philippine premiere.

Sinemusikalye was under Sinemaleta, the National Commission of Culture and the Arts' Cinema Committee offering for the Philippine Art Festival 2008. Visual Pond acted as conduit for the Sinemaleta activities.

Click here for more images.
Posted by Visual Pond at 9:05 AM