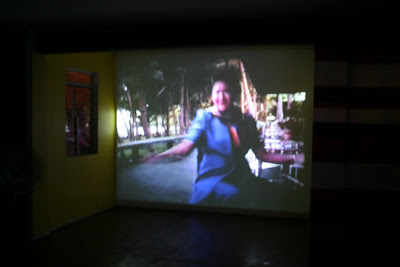 The exhibition title, masarapmatulog, refers to the name by which the artist goes by his video work. Certainly, it captures the character of his video art pieces well—frank, snappy, and with both the relish and flippant air of youth. This first solo video art exhibition of Andrei Salud shows a body of work which represents his unique aesthetic in the medium.

So what is a masarapmatulog video?

A masarapmatulog video is marked by being crisply short. Most works rarely reach a minute while some are just five to thirteen seconds long. Their briefness delivers a “hanging” quality. They are like incomplete sentences—or in a word: bitin. These suspended thoughts though are all Salud cares for—just a few seconds to deliver an idea—but they are really all the audience needs. Viewers can complete, ponder or even swat at these dangling impressions, whatever may be the reaction to what the artist has begun. This can be seen in At the Races, a 29-second work that closes with shots of a gasmasked guy in midair, about to pounce on his binocular-ing roommate, and the view from the front seat of a speeding car.

A masarapmatulog piece is often distinguished with its deliverance of irony and satire. Salud’s work can whimsically lampoon political/social/cultural figures. Stolen footage from the movie Imelda is given new flavor with the tune In Da Club by Beyonce. The catchy music includes such fitting lyrics as “My nails my hair my diamond rings/Shining with all my fancy things/My crib my car my clothes my jewels/Why you mad? Cause I came up and I ain't changed.” The image of President Marcos briefly at the start of the work hints as well at a deeper meaning as Beyonce croons, “So come give me a hug, sexy little thug.”

A masarapmatulog video artwork also at times incorporates the use of toys. These can be dolls, clay or Lego. Toys, of course, are associated with play, which is what the artist does as well. It’s undeniable that several of the artist’s works are simply experimental and indeed very random. But collectively these videos strike off into a compelling dynamic, even if it may be comedic at the same time.

There are others who also “play” and add hints of irony to their video artworks but none come as refreshing or as original as Salud. Who, after all, can suddenly come up with the idea of syncing a dated footage of our current President to a recorded sound of “I’m not wearing any underpants, you know”? Or make Barbie dolls paint a swastika sign and a fanged face on a dollar bill before setting it on fire? Or use a flashlight to mimic scuba diving in the deep or in the dark? 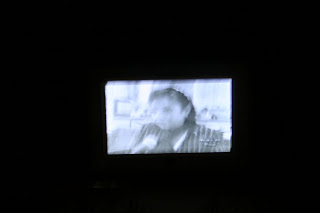 There is something about Salud’s works that are a bit twisted Nickoledeon or wry Mtv. Yet, unlike Nickoledeon, masarapmatulog videos happily delve into the political. And unlike Mtvs, his videos don’t try to sell you anything—not music, not toys, not a lifestyle, not even the artist himself who merrily continues to produce his work regardless of having exhibitions or not.

It may be argued that Salud’s pieces are done simply for amusement. Perhaps there is some truth in the statement but, if so, then why not? Who says art can’t be amusing? Like the recalcitrant and indulgent name by which Salud and this exhibition go by, his works ultimately challenge art as a dignified and solemn affair.