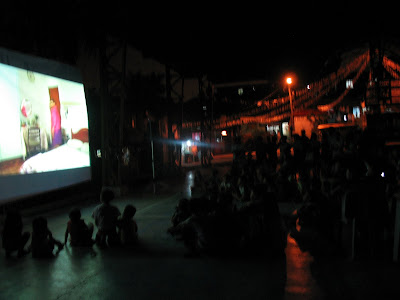 Part of the National Commission for Culture and the Arts (NCCA) Cinema committee's offering for the Philippine Art Festival 2008, Sinemaleta was a portable film festival of NCCA-funded films that was shown in pre-selected barangay centers around Metro Manila on weekend evenings. Sinemaleta aimed to bring Philippine films out of the theater and into the streets where these specific barangay communities could enjoy them while expanding their taste of Philippine cinema.

These were the venues, films and dates shown:

Sinemaleta was also the name of the larger program offered by the Cinema Committee during the Philippine Art Festival 2008. The program included Sinesilip, a showing of NCCA-funded films at the auditorium at the NCCA office every Wednesday of the month during the month of February, and Sinemusikalye, a massive new media audio-visual concert curated by Tengal with SABAW Art Projects in Remedios Circle, Malate on Friday, 16 March 2008.

Visual Pond acted as conduit for the activities.

Click here for more images.
Posted by Visual Pond at 9:00 AM