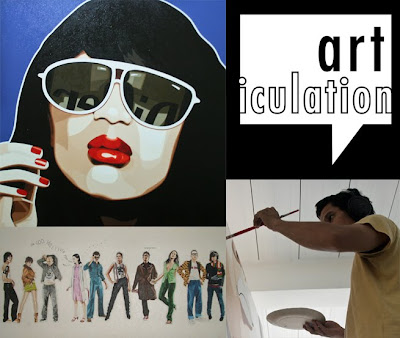 Visual Pond presents Ronald Caringal for the third episode of the Philippine contemporary art series ARTiculation. After leaving his advertising studies at the University of Santo Tomas, Caringal taught himself to paint and pursued a process which results in even and crisp visuals that are further intensified by the use of fashionable colors. His paintings' pop-sensibility and superficial looks coat the artist's personal experiences and memories which lay behind his works. He challenges audiences to look into deeper meanings behind seemingly facile images, including the environment of the mass media. Caringal, who is also the director of the independent art space Cubicle Art Gallery which will reopen later in the year, recently launched his latest solo exhibition, Puff the Magic Jargon, on view at Blanc Peninsula Manila till 24 July 2010.

Created and produced by Visual Pond, ARTiculation is the only series of its kind locally. Consisting of ten videos released online throughout the year, each episode features an artist talking about his/her body of work such as themes, influences and motivations. The series, shot and edited with a low budget, aims to be a critical and easily accessible resource for curators, writers, students, academics and anyone who wants to learn more about contemporary artists from the Philippines.