A selection from the past single-channel videos from End Frame Video Art Project 2 will be screening on loop on several monitors at the Film and Festival Workout Program of WORM & Fitness First: The Abnorminal Fitness Club in Rotterdam on 3 February, from 10 am to 3 pm, as part of the "Asian Ninja Special" of the festival. The selection for the impromptu video program was made by the artist Merv Espina who is there for a lecture/performance. Thanks Merv!
Posted by Visual Pond at 10:48 AM No comments: 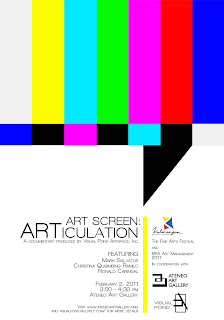 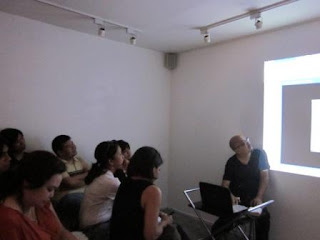 The warmest of thanks to those who came to the artist talk and "closing" of Tad Ermitano's first solo exhibition, Passage, last Saturday at Pablo Gallery Fort Bonifacio. We're happy to announce for those who haven't seen the show that Passage will be having an extended run until this Saturday, 5 February 2011. Those who are interested in obtaining pictures of the exhibition for documentation and press coverage may click here to download hi-resolution pictures (link expires 5 February, 2 am Manila time). Video documentation will be uploaded in youtube after the exhibition run. Pablo Gallery is located at C-11 South of Market Condominium, 11th Avenue corner 26th Avenue, Fort Bonifacio Taguig and is open Tuesday to Saturday, 12 - 7 PM.
The next activity of End Frame Video Art Project 3: Present will be in late March at the Ateneo Art Gallery wherein End Frame 3 curator Clarissa Chikiamco will discuss the video art collection of the Fukuoka Asian Art Museum after her research residency there this February to March. There will also be more talks presented in the months running up till the next End Frame 3 solo exhibition, which will be of Manny Montelibano, opening in August at Gallery Nova. More details on these events will be released closer to the dates.
Posted by Visual Pond at 10:27 AM No comments: 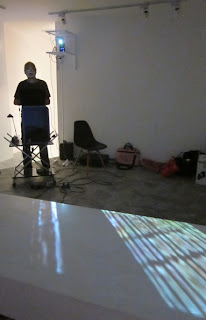 Please join us this 29 January 2011, Saturday, at 5.30 pm for the closing refreshments and artist talk of PASSAGE, the first solo exhibition of TadErmitaño, ongoing at Pablo Gallery Fort Bonifacio. Ermitaño will discuss the concept and challenges of his current exhibition, his other body of work and will be addressing questions posed by the audience and End Frame 3 festival curator Clarissa Chikiamco.

We will be sitting on the floor for this talk but those with preferences to chair seating may send an email to visualpond@gmail.com with 'chair' as the subject line and indicate how many seats desired to be provided by 7 pm, Thursday, 27 January. A maximum of 20 seats will be provided to accommodate chair requests. As equipment may have to be turned off during the discussion, we would like to advise those who haven't yet seen the show to please come earlier to see the exhibition in its entirety. For those who've already been to the exhibition, please note that Ermitaño has made some minor adjustments since 20 January. Those unable to see the exhibition, documentation will be uploaded on youtube after the exhibition run.

This branch of Pablo Gallery is located at C-11 South of Market Condominium, 11th Avenue corner 26th Avenue, Fort Bonifacio, Taguig, Manila. Please click here for a map to the gallery. It is walking distance from and located as the same street as Fully Booked. Parking is available at High Street and Market Market area. The gallery is open Tuesday to Saturday, 12 noon to 7 pm. For Pablo inquiries, please call Lara at +63.999.5160645.

Passage is a project under End Frame Video Art Project 3: Present, a series of solo exhibitions of artists presenting new video work from 2011 to 2012. For inquiries on the project, email visualpond@gmail.com with 'end frame 3' as the subject line.
Posted by Visual Pond at 1:12 PM No comments: 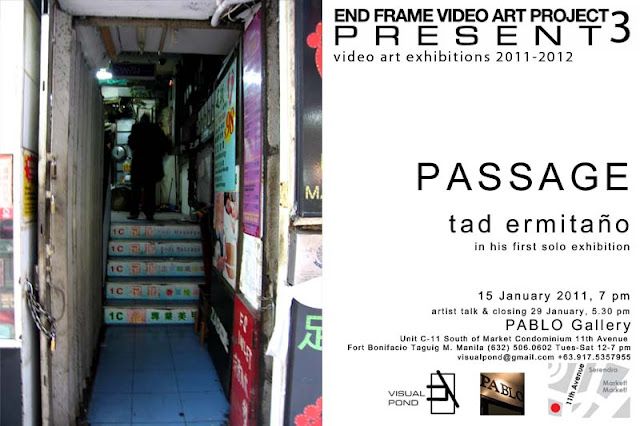 End Frame Video Art Project 3: Present, a Philippine video art festival, commences this month as the third edition and new format of the video art festival which took place in 2006 and 2007. Presented by Visual Pond, the theme Present refers to the current project’s focus on selected Philippine contemporary artists’ practices in video art. Throughout the festival, each artist stages a show presenting new video work in various venues from January 2011 to January 2012.

The festival proudly launches with Passage, a solo exhibition by Tad Ermitaño, opening on January 15 at Pablo Gallery, Fort Bonifacio. A site-specific work responsive to the two rooms of Pablo and the stairs between them, Passage utilizes multiple projections and video mapping technology in a crossover of fairy tales and science fiction. Ermitaño, who has studied philosophy, biology and filmmaking, has participated in several local and international group exhibitions and film festivals, including the 2002 videoart.mov, the 2004 Hong Kong International Film Festival, the 2006 Ogaki Biennale, the 2007 Dime a Dozen at Lopez Museum, the 2008 Inter-society of Electronic Arts juried exhibition and recently, the Hear to Ear exhibition of Fete dela Wsk. Passage marks the first solo exhibition of this media artist, running until 29 January 2011 with a closing talk by the artist at 5:30 pm.

Pablo Gallery, located at C-11 South of Market Condominium, 11th corner 26th Avenue, Fort Bonifacio, Taguig, is open Tuesday to Saturday from 12 noon to 7:00 pm, tel. no. (632) 506-0602. Other confirmed artists presenting new works for End Frame 3 include Manny Montelibano, Claro Ramirez, Kiri Dalena and Kaloy Olavides with the full schedule and line-up to be announced soon. For inquiries on the project, call +63917-5357955 or email visualpond@gmail.com. Passage is with thanks to Green Papaya Art Projects.
Posted by Visual Pond at 9:03 AM No comments: