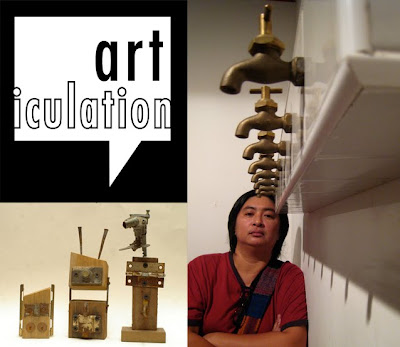 The second episode of Visual Pond’s exciting new series on contemporary artists from the Philippines presents Christina Quisumbing Ramilo. A graduate of University of the Philippines and New York University, Ramilo’s art has in recent years shifted from drawing and painting to sculpture and installation using found objects. The shift an outcome of her transition back to Manila after twenty years in New York, Ramilo employs a reactive approach to art based on her surroundings. Her most recent work, Karaoke Art Project, is currently on view at the group exhibition, YOUtubia, at Finale Art File in Makati, until 2 May 2010. Ramilo is also the founder, creative director and project coordinator of Martinez Art Projects (M.A.P.), a group of mentors and prodigies that do collaborative art projects based in Father Martinez Street, Quezon City.

Created and produced by Visual Pond, ARTiculation is the only series of its kind locally. Consisting of ten videos released online throughout the year, each episode features an artist talking about his/her body of work such as themes, influences and motivations. The series, shot and edited with a low budget, aims to be a critical and easily accessible resource for curators, writers, students, academics and anyone who wants to learn more about contemporary artists from the Philippines. A catalogue featuring the ten artists will be made available at the end of the year.