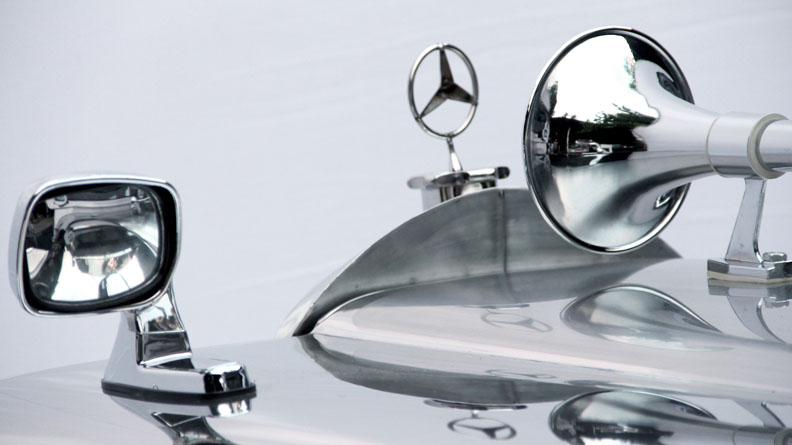 End Frame Video Art Project 3: Present, the 2011-2012 Philippine video art festival, together with Silverlens 20Square, presents Maria Taniguchi’s solo exhibition, Untitled (Celestial Motors). The show opens at Silverlens 20Square on 15 March 2012, Thursday, at 6 pm and runs until 14 April.
Untitled (Celestial Motors) features Taniguchi’s video of the Philippine jeepney, using one from the Celestial Motors factory in San Pablo. Focusing on an unadorned unpainted jeepney of stainless steel shot against a white backdrop, the video bares the jeepney as an object of study. Through simple, crisp and startling takes showing the jeepney stripped into its basic form, the video distances from any specific context and instead acts as framework in accommodating the full weight of this iconic vehicle.
Maria Taniguchi studied sculpture at the University of the Philippines and graduated with an MFA in Art Practice from Goldsmiths, London. She took part in the LUX Associate Artists Program and recently won the 2011 Ateneo Art Awards. Her practice considers information, juxtaposition and relationships of her subjects of study.  She lives and works between London and Manila and will soon do a residency at Artspace Auckland in New Zealand.
Taniguchi’s Untitled (Celestial Motors) is also the sixth offering of End Frame Video Art Project 3, a project of the non-profit organization Visual Pond. Throughout the Philippine video art festival, artists stage a solo show presenting new video work in various venues from 2011 to 2012. Curated by Clarissa Chikiamco, the theme of the third edition, Present, refers to the project’s focus on the current video art practices of selected Philippine contemporary artists. Taniguchi’s exhibition follows the End Frame 3 shows of Tad Ermitaño, Manny Montelibano, Chitz Ramirez, Kiri Dalena and Kaloy Olavides. End Frame 3 caps with an exhibition by Yason Banal later this year.
Untitled (Celestial Motors) is made possible through the support of the LUX Associate Artists Program/Leverhulme Fund, London, UK. The show will be viewable throughout its run between Monday to Friday, 10 am to 7 pm, and Saturday, 1 to 6 pm. Silverlens 20Square is located on 2320 Pasong Tamo Extension, Makati. Call (632) 816.0044 or visit http://slab.silverlens.org. For inquiries on Visual Pond projects and End Frame 3, visit http://www.visualpond.org or email visualpond@gmail.com.
Posted by Visual Pond at 11:16 AM