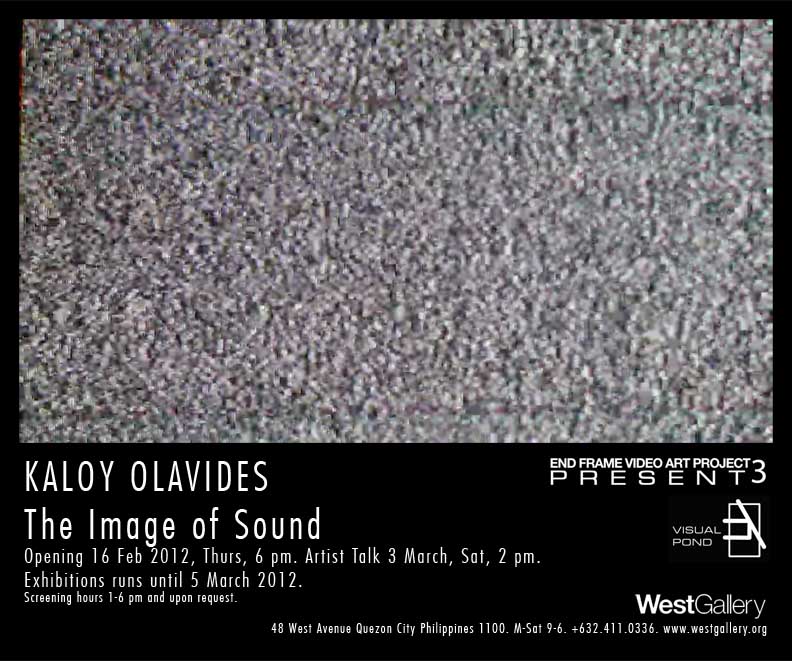 Visual Pond’s End Frame Video Art Project 3: Present, the 2011-2012 Philippine video art festival, together with West Gallery, presents The Image of Sound, the solo exhibition of Kaloy Olavides. The show opens at Gallery 2 of West Gallery on 16 February 2012, Thursday, at 6 pm and runs until 5 March. An artist talk will be held at 2 pm on 3 March, Saturday.
The Image of Sound focuses on the significance of sound to video, which, as a moving image, has been more dominantly associated with visuals and the act of looking, seeing and watching. Yet, examining another sensory quality, Olavides’ exhibition centers on the medium’s aural experience, done through documentation of simple performative techniques. While forcing the audience to concentrate on sound, the show seemingly negates the importance of images. Yet, in its austerity, The Image of Sound points to the vitality and potency of both these elements in the recognition of how one informs the other.
A year 2000 fine arts graduate from the University of the Philippines, Kaloy Olavides practices with painting, collage, performance and sound and video installation. His works’ themes are inclined to absurdity, irony, anxiety, deception and redirection. His artistic practice is informed by his work in production and sound design for films, music videos, commercials and audiovisual presentations. Olavides is also currently a member of the experimental sound collective Elemento.
Olavides’s The Image of Sound is also the fifth offering of End Frame Video Art Project 3, a project of the non-profit organization Visual Pond. Throughout the Philippine video art festival, artists stage a solo show presenting new video work in various venues from 2011 to 2012. Curated by Clarissa Chikiamco, the theme of the third edition, Present, refers to the current project’s focus on the video art practices of selected Philippine contemporary artists. Last year’s End Frame 3 shows included presentations by Tad Ermitaño, Manny Montelibano, Chitz Ramirez and Kiri Dalena. End Frame 3 continues into 2012 with exhibitions by Olavides, Maria Taniguchi and Yason Banal.
The show will be viewable throughout its run between Monday-Saturday, 1 pm to 6 pm, and also upon request. West Gallery is located on 48 West Avenue, Quezon City, telephone number (632) 411-0336 with website at http://www.westgallery.org. For inquiries on Visual Pond projects and End Frame 3, visit http://www.visualpond.org or call Rica Estrada at +63917-8170198 or email visualpond@gmail.com.